The Delgado West Bank Campus Advanced Technology Center represents a significant expansion of the 15-acre footprint of the West Bank Campus. The center will house all academic STEM programs including classrooms, laboratories and faculty offices. It also includes an open common space and meeting spaces.

The 32,000-square-foot facility is located at the corner of Shirley Drive and Constellation Street, on land acquired by Delgado from the Algiers Development District (ADD). The ADD is redeveloping Federal City, the site of the former Navy base in Algiers that is adjacent to the Delgado campus.

“This beautiful facility provides a magnificent gateway to the main entrance to New Orleans Riverside at Federal City and personifies the Algiers Development District’s ongoing commitment to education,” said Mark Major, Chairman, Board of Commissioners for the Algiers Development District. “This Advanced Technology Center will join the highly performing New Orleans Military and Maritime Academy, our enthusiastic varied and diverse tenants, along with our respected United States Marine Corps and United States Coast Guard teams, to comprise the nucleus of a vibrant residential, commercial, and education-centered asset to our city."

The Delgado West Bank Campus is located at 2600 Gen. Meyer Avenue, and its frontage on the busy commercial and residential thoroughfare extends from Pace Boulevard to Shirley Drive.

With a current enrollment of 2,500, the Delgado West Bank Campus has served Algiers and the West Bank for six decades as the local public college.The Delgado campus opened in 1967 to provide public higher education west of the Mississippi River in the New Orleans area.

The investment in the Delgado West Bank Campus Advanced Technology Center will give the school the capacity to teach up to 2,000 more students. Specifically, the center will focus on the healthcare, petrochemical, digital media and transportation logistics industries.

The expansion is designed to create a workforce pipeline for the West Bank’s industrial needs, and to ensure access to higher education. Announcing funding for the project in 2018, Governor John Bel Edwards said it was important for students to get an education “in close proximity” to where they live.

Delgado, the largest community college in Louisiana with an enrollment of 20,394, has seven locations in the greater New Orleans region. There are currently more than 3,000 Delgado students from households in West Bank communities including Orleans and Jefferson parishes—about 850 Delgado students live in Algiers, which is part of the City of New Orleans and Orleans Parish.

Delgado Community College and the ADD previously collaborated to acquire and open the West Bank Campus Student Life Center, which opened in September 2015. That 10,800-square-foot building was the former chapel at the Navy base. A $2 million investment by Delgado transformed it into a thriving center for student activities and community events. 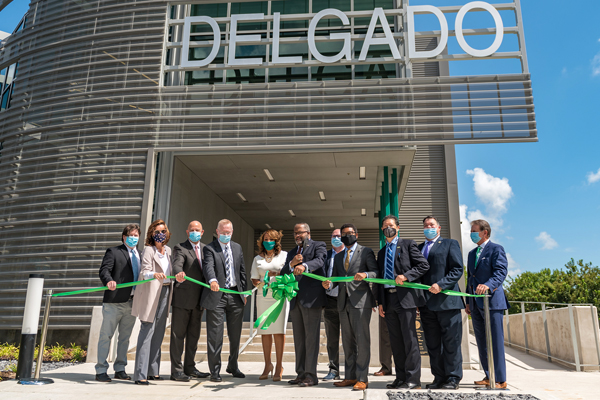